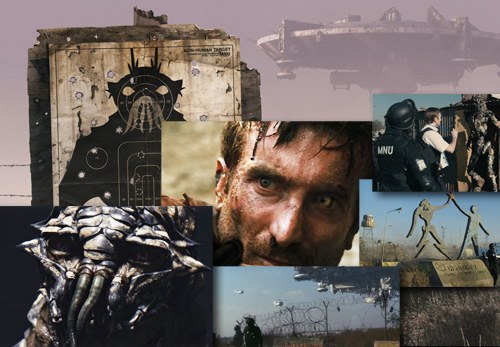 Half of D-9 is like a documentary. At first, in my opinion (of course…) it is stretching the documentary like part too much, to a point I was thinking “well, where’ s the action part?”.

The casting of Sharlto Copley is excellent. He plays his character and develop it in an excellent way, in looks and in behavior.

I find the aliens looks including “the hand” unoriginal and a bit of a cliché – maybe intentionally, trying to create a familiar feeling to it, but I think it was almost like a parody about aliens…but just marginally.

Other than the alien look (something between a character from “Pirates of the Caribbean and Predator”) and their hands (any 50s sci-fi movie…),  the fighting machine is a “Alien” à la Sigourney Weaver style, “The Fly” like transformation (though less disgusting than Jeff Goldblum’s) and Independence Day spaceships.

I enjoyed the South Africa location, accent, Afrikaans, Nigerian and  alien language mix and the bureaucratic absurdness 1984/Twelve monkeys/Brazil style in the main character nomination  and his behavior.

It’s an enjoyable movie, with some “blow ’em up” action, with a refreshing  (if not original) approach. Go and enjoy.

« Pickled jalapeños Cloudy with a Chance of Meatballs – Movie Review »