Oh so dark and never ending … 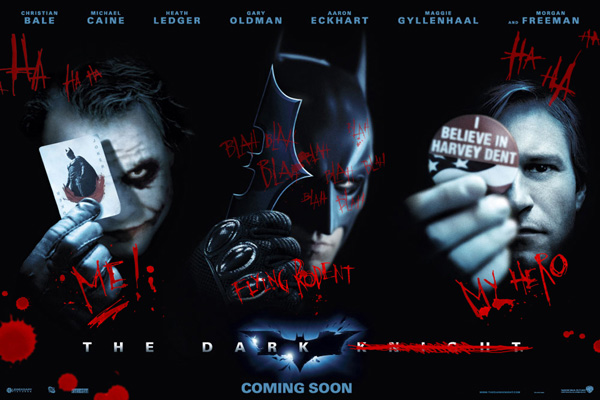 Overall acting was great. Michael Caine is one and only, Heath Ledger did an amazing job, Christian Bale, Gary Oldman, Morgan Freeman, all great actors, each in his own (if somewhat crazy) way… but who casted Eric Roberts? Come on…. Maybe it’s me, but on his first appearance there I flinched, and every time he reappeared or spoke I got goose bumps (in a bad way). Luckily he was kept relatively quiet. And I leave it at that. Next time use Julia.

So, let me opine on the movie. It is very well made, lots invested in it, very realistic action scenes, even the comic book style ones are believable… but to me it was also very disturbing. It was as they had too much evil put into a comic book movie. Heath (the poor chap) plays his part so well, that it becomes disturbing of how evil he is – first thing that came to mind was Islamic terrorism – being bad with no reason and with no common sense behind it, bad for the sake of being bad. Even Michael Caine’s jokes did not ease up the disturbing feeling I had.

I want to enjoy a movie, not be disturbed by it. This movie is a llllllllllllllong two and a half hours of disturbing scenes. Without being a spoiler I’ll say that even the “pencil disappear” scene, that could’ve been a funny one with many bad guys, became a disturbing one with Heath’s way too realistic Joker.

The scene with Oldman’s kid at the end? Come on… this is a comic book movie…

I guess I made my point about that….

Visually the movie is excellent. I wonder if The Joker’s makeup resemblance to Blade Runner’s Daryl Hannah’s character, Pris, was intentional. His scars, again, are way too realistic. And they used more close-ups than any British TV show has ever done… did I say disturbing?

Even when Bruce (Bale) gets beaten by a dog they show the wounds twice, and real close, to make sure you get it… two face’s burns…no place left for imagination… I did say disturbing right?

Surprisingly, except for very short scenes and no real close-ups, no real hot babes scenes (ok, a little on the yacht and party, but very short). Come on, you got Bale taking off his shirt, what about some balance? A little relief from the neck tightness from the rest of the dark dark scenes…

To start and wrap this long review – this movie sets a new level in marketing and quality of the product, no doubt. Heath’s tragic death is definitely serving the hype even more. Acting is amazing (even Roberts doesn’t spoil it), picture and action scenes are excellent, so, make sure you go early, drink coffee and make sure you pee before the movie, and go and see it, but be ready to be very… disturbed.