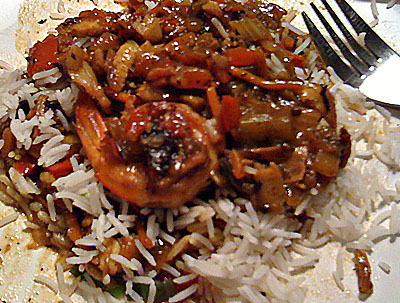 The story starts with me fishing with the kids at Lake Hopatcong (great place). We’ve been there before, and last time I made seafood pasta with the fish we got (maybe I’ll write about it sometime…). This time, the last fish of the day was a small catfish my son got, so I got the idea to make catfish Jambalaya.

I fileted all the fish we caught (mixed, including the catfish) and got some shrimp. Shrimp were peeled with only tale on (uncooked of course), and fish pieces cut small, probably 2” in size, maybe less. Play with it – no rules…

You can use any seafood. Catfish, white fish, shrimp, clams, mussels, whatever. Clams and mussels cook before adding…

Seafood – as described above. I used mixed fish including catfish cut to 1-2” pieces and shrimp. Pound to two of fish, 20 shrimp, depending on how many people and if you want leftovers…

Butter – half a stick.

Cooked rice to serve it on.

Scallion, chopped, to add on top when serving.

I used a deep large Teflon heavy pan – chose your weapons as you like… Fry the bacon pieces until starts to get crispy, then pull them out leaving the fat behind. Add the butter,  and when melted add the onions and sauté them (well, actually fry them…) a little until starts softening, then add celery and bell pepper, carrots and mushrooms (and whatever vegetables you’d like to add, up to you…). Sauté it for a few minutes until starts to looks it’s cooking. Add Garlic.

Add spices and soup powders and tomatoes  and mix for another minute or two.  Push to the sides making a free spaces in the middle and put in the fish pieces, fry until cooked a little, move aside, add shrimp and fry until starts to get pink, put back the bacon pieces, mix gently all together. Add about two cups of water and mix gently. Let cook a little until the liquid looks a little thick. Cover and cook for a few more minutes.

Put rice layer on the dish. Put some Jambalaya on top. Put some cut scallions on top. Eat.