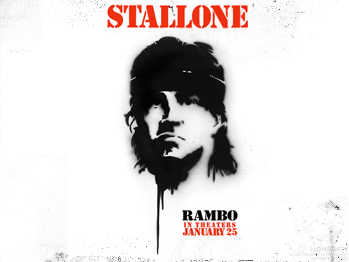 Ah, if only it was played by someone else.

Look, chapeau to Sly, he’s made a huge franchise(s) and got his undeniable fame and fortune, and the bottom line speaks for itself… The movie is fun…. but….

I can’t ignore looking at his face and getting the sensation that he “ain’t the sharpest tool in the shed”. And the scenes with shooting the whole Burmese army with the .50 machine gun, and blowing off heads with the Barret .50 sniper gun,  is making it look cheap in my opinion.

But, taking it as a no-brainer action movie, it is fun to watch. The first Rambo,  First Blood,  was a movie that is a land mark – the first Mad Max, the first Indiana Jones,  The first Rocky, the first Jaws…  so even that his face reflected to me the same brightness in the first movie, it worked OK with the new idea and fresh excitement about the movie.

As I wrote, take it as a no-brainer… you know that he’ll be alone somewhere, miserable, that he’ll have to save people that got into a situation (probably because they did something special), that he’ll do it because he feels like he’s got to, that someone will speak to his heart to ask him do it,  that he’ll save the people he respect… no spoiler here, because that’s all a prerequisite from a Rambo movie…  yes, they also try to sell us the Burmese situation as a noble cause to create the movie, and push Christianity (ha) as a way to categorize people as good hearted (both the Burmese victims and the people who help them), both I find unwelcomed, but ignored completely as I dumb myself to enjoy it…

So, if you’re looking for an action movie to enjoy, make sure you leave your wits behind and dive into it with a blank mind with close to zero processing.

As a side comment – I find School Boy, the sniper character played by Matthew Marsden, I found the coolest of the bunch, and maybe the best character in the movie…

So, rent and have a fun hour and a half with it….