In the aftermath of hurricane Sandy, an overused and abused phrase by now, I came to realize something that’s been lurking in my mind for quite a while now. We are going downhill. When I say we,  I mean the USA, though in many ways this is true of many other nations, but since I live here in the US, specifically in the torn down and ripped apart eastern part of New Jersey, I am most concerned about the US of A.

I’ve been pointing  it out for a while, in many different ways, referring to many different subjects. Customer service, quality of products, integrity of elected officials, medical insurance, cost of living, national debt, even the way the president talks, all not only going from bad to worse, but the rate of deterioration is increasing.

Last year’s storm left me without power for a week. The temperature inside my house was close to freezing. I was better off leaving my refrigerator door open than closed. My basement was flooded as the sump pump ran out of juice with the long power outage. Cars stretched in long lines to refuel and you couldn’t get bottled water anywhere. Roads were blocked for days, power lines were tangling loose ended in some locations for over two weeks… I was sure this will be an eye opener to the authorities of what needs to be done in order to prepare for such events. Oh how naïve I was.

Here comes Sandy. Yes, a very strong storm, blah blah blah. I was here during the storm. Very strong winds in our area. Some rain, but not enough to flood anything here (lucky us). Temperatures were high enough to go outside in a t-shirt to check things. So the real factor was only wind in my area.

In my neighborhood, at least in a radius of 100-200 houses around my house, there were no major trees or branches that fell down. We were lucky.  Travel a little further and you see trees, big branches and utility polls that crashed down – but not as bad as the storm the previous year, or the storm two years before.

Yet, the whole area surrounding my house was without power from Monday evening to Friday evening.

Lines to gas stations, the few that were open in the days after the storm, were longer than ever before. Some stations limited gas to only handheld containers, with lines of hundreds of people standing, under sporadic rain and windy conditions, to buy gas for their generators and cars. 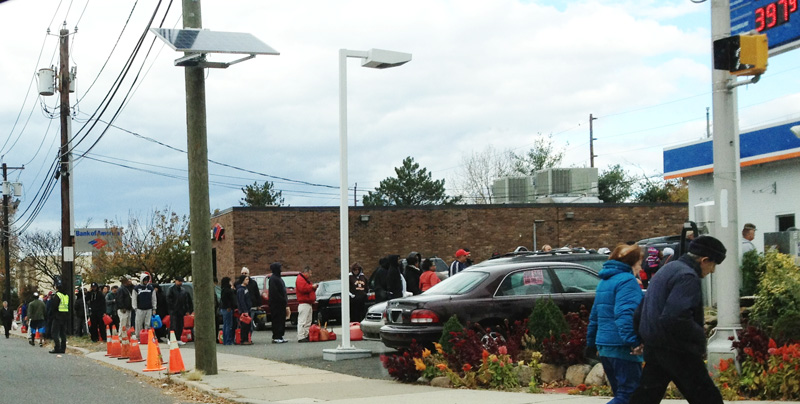 I stopped my car looking at this scene of people on foot waiting in line for gas, seeing it with my own eyes, yet finding it hard to believe what I see. Where and when are we? The old pictures of bread lines in Russia during the war were my immediate reaction.

This morning of Election Day, 8 days after the storm, I waited in line for gas for half an hour and had to drive away, not even half way to the gas station. And I’m at an area that had it easy. Staten Island, Toms River, Breezy Point and many more were and are still in a much worse situation.

I find it a shame and a disgrace that the USA government is not capable of getting prepared for such events. From power lines that snap every time it’s a little windy to insufficient or no flood protection to the shoreline, from no contingency plan for gas shortage to insufficient crews to clear blocked roads – as I see it, these are all a reflection of how the nation is falling apart.

The country that planned missions to space, covering unpredicted scenarios and successfully putting man in space and on the moon, with leaders that established forward looking laws as the US constitution, structuring a foundation that holds to this day. Where are these achievements today? It’s not that Americans are not as smart, creative or capable of hard work as they were in the past. Ideas and creativity and motivation to succeed are probably stronger than ever. But leadership? I find this is the missing part.

I read in a TIME magazine a quote of the US philosopher Mortimer Adler:

Can you see these three simple definitions in any of the current elected officials? My personal opinion – the only one that can touch that, is New York City’s mayor Michael Bloomberg. The two presidential candidates? Eh…no.

I watched the debates. Both candidates and both VP candidates were a far cry from earning my respect. How do you consciously vote for a president when your criterion for choosing him is that he’s not as worse as his opponent?  Yes, I’m not voting today.

And this trickles down to the lower ranks in the government, local authorities and the private sector, creating a situation that weakens the nation, hurt our quality of life, and a change in that trend seems impossible with the current mindset and structure of the US leadership.

I can write dozens of pages about the subject, but my point will be the same. I don’t see how the election results today are going to have a substantial effect on the downslope we slide on as a country. We need change. I can’t say I have the answers, but neither candidate seem to have them either. And that’s their job which I find hard to believe they can perform.

How do we turn this horror movie to one with a happy ending?